London artist Alexander Hayden James Smith and the New Roots Team have created a series of murals in various schools in South London. A mural is a creative way to revive certain areas, draw attention to or celebrate a building’s place in its wider community. A mural is any piece of artwork painted or applied directly on a wall, ceiling or other large permanent surface. A distinguishing characteristic of mural painting is that the architectural elements of the given space are harmoniously incorporated into the picture.

An 80 square meter mural designed by artist Alexander Hayden James Smith, depicting the Thames, surrounded by stencils of various local landmarks such as Tower Bridge, Canary Wharf, Millennium Dome, Thames Barrier, Rotherhithe tunnel, and a little Blue Box! Created to celebrate the school and its place in the wider community. A few words from Alex’s blog regarding the mural:

“In August of 2013 I was invited by the Headteacher of Rotherhithe Primary School to design and paint a mural, in conjunction with New Roots, a landscaping and garden services company founded by Christopher Harrod-Green and his son, Robert, a very old friend of mine. Work on the mural was completed by the beginning of September by myself, Robert Harrod-Green, and Laura Harrod-Green.

The wall in question is located towards the rear of the school in the car park, facing on to Rotherhithe New Road. As you can see from the photograph below, we had quite a job ahead of us…”

“This is the (very!) basic design for the mural. I did this with no reference to scale or measurements – it was based purely on one visit and the photographs I took. Naturally the design of the mural evolved and changed as we found ourselves in the very real situation of painting it. My intention regarding the various landmarks above was to do them as stencils; something I had never attempted before.”

The design was inspired by a conversation with the Head Teacher, in which she iterated how the school is seen as the ‘anchor’ of the community, hence its use as the school’s logo. Indeed, with the area’s famous maritime heritage, one sees the anchor symbol repeated around several buildings in Rotherhithe. The idea of using the Thames as a focal point was also sparked by this conversation and keenly taken up by myself; Rotherhithe is situated at a very interesting bend in the Thames and the opportunity to include several local landmarks was too good to miss. This aspect of the mural would, too, evolve as we painted.
Finally, she also asked me to somehow integrate the school’s five ‘core values’ into the mural somehow, these values being “Caring”, “Courageous”, “Ambitious”, “Resilient” and “Empathetic”. The school has an additional motto of “Hope and Courage” which I would later incorporate into the design.

So, prepping the surfaces then…

“Above, as I apply the blue you can see our friend Ollie helping out by whitewashing the door, having stripped it earlier in the day. As with the white masonry paint, we were able to dilute the blue without any corresponding loss of colour, which was most handy. By saving some we were

“The wall received two coats of white masonry paint to compensate for the dilution (the above picture is after the first). In the centre of the main wall you can also see the galvanised-steel trunking placed by Rob to tidy away the wires, and on the very right of the picture you can see yet more, as well as the wooden box built to contain the mysterious electronic device that was just hanging there. The plastic has also been removed from the cage doors, and work, by this point, has already commenced on the new ones…”

“The next step was to apply a bit of colour…”

“Here you can see the completed wall – two coats for the masonry paint, once again – as well a seemingly gratuitous topless-shot of myself. In fact, I am busy painting the newly-constructed doors, one of which can be seen in the foreground…”

“The next step was to draw the shape of the river on to the wall. In order to prepare for this task I had printed off a photograph of the wall and drawn the river on to it (as well placing the various landmarks). It was rough but served as a guide for where the major points should fall.

The first step was to draw a chalk outline. In order to facilitate this, Rob hit upon the genius idea of attaching a large piece of wood to a broom handle and attaching two small brackets that could hold the pieces of chalk. This would ensure a consistent size for the Thames.

Having drawn the outline in chalk, we next went over the outline in white acrylic. Normally I would leave the outline of any painting until last, but since we were nearing the end of the day I didn’t want to take the chance that possible rain might wipe away the chalk.”

“In the centre of the below photograph you can see where the redundant night-safe has now been boxed off and incorporated into the mural.”

“Unfortunately, having reached this satisfying point, we then found ourselves rained off for a day. Rather than let this stop us, we instead decided to focus on getting the stencils drawn and cut out, beginning with Canary Wharf and the anchor that would be used to represent both Rotherhithe and the school itself…”

“Here you can see the anchor-party that the area representing the school has become. Also visible is the developing All-Seeing-Eye above Canary Wharf, and the final two school values: “Caring” and “Ambitious”.
“The next stencil to go up was the Millennium Dome. “

“Next was the Thames Barrier…”

“Which brings us to my bête noire; my white whale; my nemesis; the stencil I had been putting off for ages. The stencil I never really thought I’d have to do.
It was time to do Tower Bridge.
My apprehension regarding Tower Bridge was mainly to do with its size. I had merrily painted the river on the wall without a care for its dimensions, hoping only that it would be bold and visible. It turned out that the width of the river on the mural was roughly a metre and twenty, meaning that the span of the bridge had to be at least that; and, in order for the whole thing not look awkward, the towers that give the bridge its very name would have to be utterly massive.
Like I said, I was intimidated. My card was only A1-sized. I panicked.
I was an idiot. The idea came to me in the bath, like all ideas do, and I cursed myself for a fool. Tower Bridge may have to be large, that was true, but it was also symmetrical; do one side and you’ve effectively already got the second side!
Renewed, I set to work. “

“This was the preliminary result. The towers themselves are composed from two separate stencils; one for the main shaft (ahem) and another one for crowning peak. The bridge and walkway sections are the same singular stencil, just repeated across. In this instance I began on the north side of the river and worked across from there.”

“As mentioned previously, the hand-painting method really takes its toll on the old stencils so, bearing in mind how many times I would have to reuse these ones, I had to be a little more careful with my sloppy painting. The railings, seen at the lower left, were particularly tricky, as you might imagine; they were like crusty blue tagliatelle by the end of it. To the right of the north tower you can see the first of the school’s values; “Courageous”. This was done with the ‘negative’ stencil effect, as seen with the anchor on the box.”

“Also, below the south tower you can see what looks like some sort of blue box materialising, perhaps with a wheezing, groaning sound…”
“That blue box appears to have fully materialised…Ah! That’s what it is!”

“Another late addition to the design was the Rotherhithe Tunnel…”

Meanwhile, the side wall was also being decorated with the school’s values. It has to be said, using spray-paint is incredible fun…

On the whole, I must say that this whole enterprise has proved to be one of my most rewarding experiences and a great way to spend the summer. It’s forced me to dig deep and call on skills that I thought were long gone, and working alongside your friends is always going to be better than the alternative. Now, I’m just looking forward to the next project…” 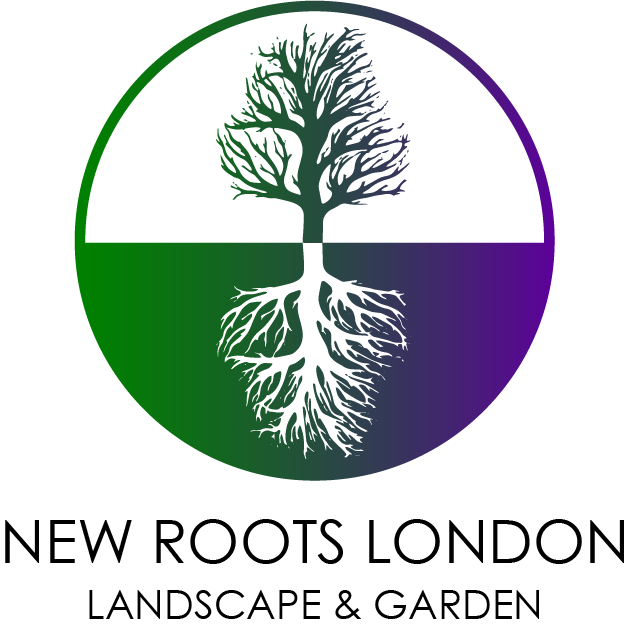 BOOKINGS
CONTACT US
Related Projects
NEW ROOTS | LONDON
ABOUT US
New Roots is a family run landscaping and garden services company based in South London. We are currently running a school playgroup called 'The Gardening Club' where we interact with local schools with the aim to teach the children how things grow, whilst taking ownership of the practicalities and cycles involved in horticulture.
AGE UK | MEMBER
Instagram
TWEETS
Bark.com
New Roots London
PAY BY…